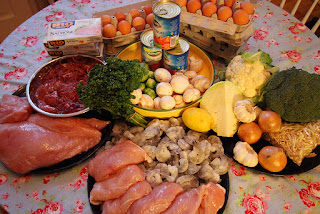 Caveman diet is a diet plot that is aimed to mimic, as much as possible, the way that human ancestors ate more than ten thousand years ago. It is also known as the Paleolithic diet. It suggests including only foods that were available to humans during the Paleolithic period. During the Paleolithic period, human ancestors were gatherers and hunters. They consumed foods found in the wild, vegetables and fruits that were cultivated locally. Also during this period, everything was eaten raw. Dairy products such as milk were not available since animals were still not domesticated.
In this diet, it is assumed that the human body is not designed to be able to process foods that were not available for consumption during the Paleolithic age and by getting rid of these foods, the human body will function more in the way which it was designed resulting to excellent health and a lesser risk of common diseases such as diabetes, obesity and heart disease.
Some versions of caveman diets that recommend grass-fed lean meat may give additional benefits since these meats have higher omega-3 fatty acids content compared to ordinary meats. Meats high in omega-3 fatty acids are beneficial for the heart and cardiovascular system.
Caveman Diet Food List
Some proponents of this diet recommend eating a selection of very lean meats raised close to like that of wild animals while there are some proponents who suggest consuming a large amount of red meats with high content of stout.
The fundamental of this is that only foods that can be eaten raw should be included since fire was not yet learned during this period. But, basing on the diet, food doesn’t have to be consumed raw and plain but this can be moderately prepared. It can be cooked but should be consumed closely to its raw state. No complex food preparation method should be involved. Since food has to be eaten raw, this diet excludes foods like beans, peanuts and peas since these foods have to be cooked. Processed foods in any way like any agricultural methods, complex processing and canning are also forbidden. Examples of these are refined sugars and other huge amounts of foods usually eaten by common consumers today. Dairy products such milk, cheese, butter are not allowed while on this diet. But, eggs are allowed on this diet. Since agriculture was not present during this period, grains of any kind are also not allowed while on this kind of diet. Starchy root vegetables like yam, cassava, potatoes and sweet potatoes should be avoided.
Show More
Share
Facebook Twitter LinkedIn Tumblr Pinterest Reddit VKontakte Odnoklassniki Share via Email

How To Feel Fuller On Less Food

Weight Loss Solution – Shed The People Holding You Back

Find out more or adjust your settings.

This website uses cookies so that we can provide you with the best user experience possible. Cookie information is stored in your browser and performs functions such as recognising you when you return to our website and helping our team to understand which sections of the website you find most interesting and useful.

Strictly Necessary Cookie should be enabled at all times so that we can save your preferences for cookie settings.

If you disable this cookie, we will not be able to save your preferences. This means that every time you visit this website you will need to enable or disable cookies again.